Finally, we are back from our down under trip. It was great as it always is.

I left Switzerland on the 12. Nov. flew over Singapore to Perth. There I just picked up our little Britz Van and drove back to the Airport to welcome Adrian and gave him a lift to Busselton where we stayed one night at a friends house. From then Adrian was on his own van, on the Batvan I have to say.

Then we drove to Margaret River because I have some Windsurf gear down there. As Adrian lived there for 4 years we were visiting some friends.

After 3 days in Margs, we decided to drive up, because the forecast looked pretty ok. It’s a 1400 km drive and we made it in two days. Arrived in Gnaraloo, we met our friends and build up our little camp. The wind was blowing every day and the time left quickly. After one week Esthi arrived. She flew from Perth to Carnarvon in 2 hours. So I drove early in the morning to Carnarvon to pick her up. After spending again 500$ at the supermarket, we drove back to Gnaraloo.

We were sailing nearly every day, the waves were small but still something to do. After 10 days we could see a good swell on the forecast. Everybody was hot to sail some bigger waves. And surprise surprise, the swell was quite good, with some logo to mast high sets.

On the two following days, the waves were still good. Everybody was happy and spent a lot of time on the water. After a couple of days, the swell disappeared and the wind got stronger and stronger... 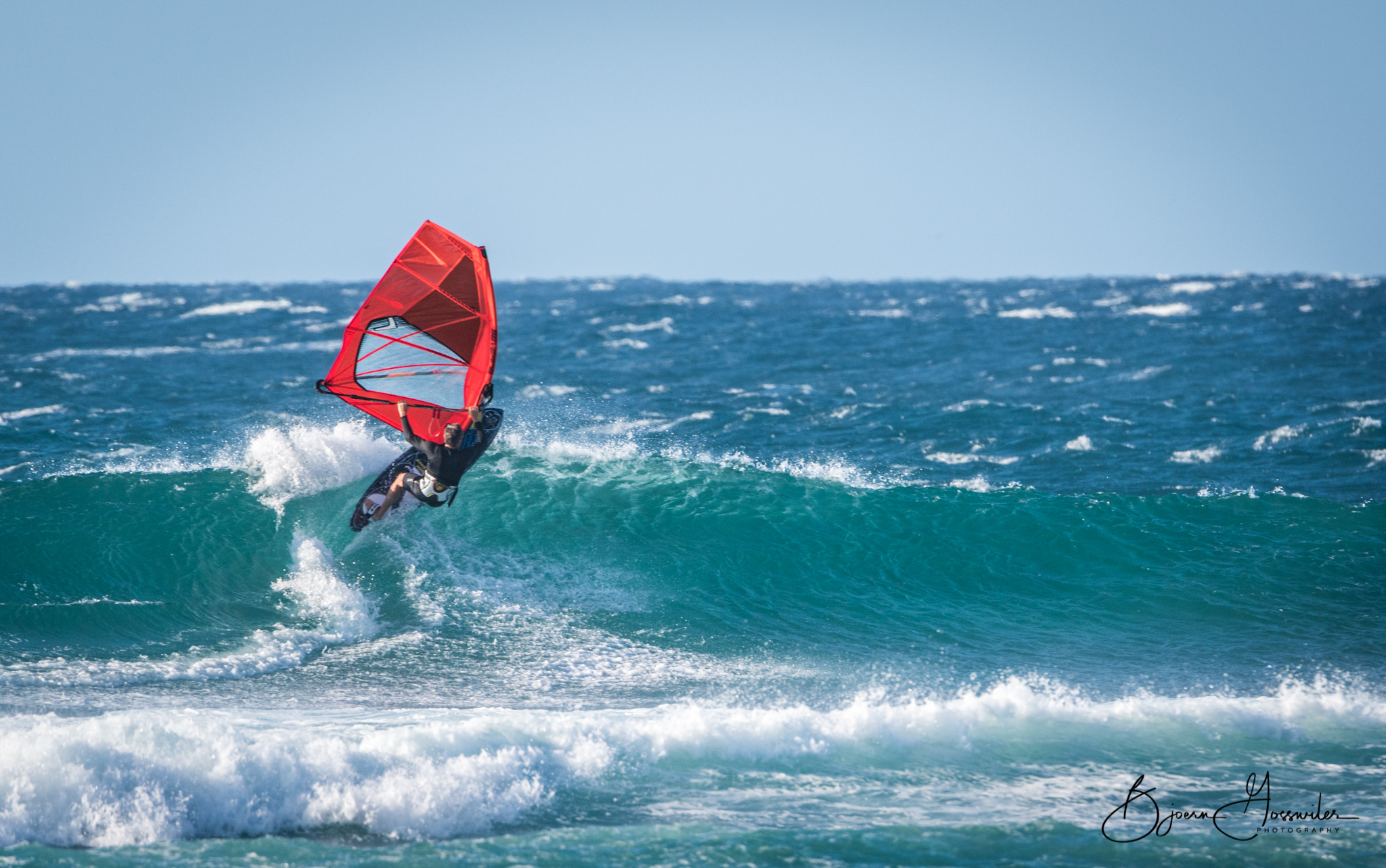 We had to look on the calendar because we only had 5 more days until our return flight. The forecast showed us a nice swell for Friday but we had to drive down on Thursday - damn! But luckily the forecast for Margaret River looked awesome! I expected over mast high waves with side shore wind…

So we left Gnaraloo with a good chance to catch that swell at the main break. Tobias left the camp with us, but he had to drive directly to the airport, sorry mate!

Arrived on Wednesday around midday we picked up another big board from Patrik's Shed because I expected light wind. Arrived at the main break we could see that already some big sets purely rolled. The wind was quite strong, so I took the 4.8 which was in the end too big. The wind was a little bit onshore, so the waves were not that clean. Waiting for the offshore wind all local guys arrived. Scotty went out first around 5:30 PM. The waves got cleaner and cleaner but the wind was so weak that we could see that he couldn’t catch the waves. Around 6:30 PM there were 7 windsurfers out; Scotty came back just scored one wave…

I decided to take some pictures instead to try to stay in the lineup. I got some nice shots. Also, the forecast looked good for the next day, even a better wind direction during the afternoon. Corey in his element

So on Thursday, we arrived again around 2:00 PM. The seabreeze (wind from the south) was fighting with the offshore wind… we all were waiting for a little bit constant wind. Around 4:00 PM I went out with 5.0. Still not enough but the waves were pretty clean because of the light offshore wind. I scored some waves and slowly got the feeling sailing bigger waves.

Friday was our last day. We had to clean a lot of stuff, organize things, say goodbye to our friends.

As a resume, I have to say we enjoyed this journey. In 5 Weeks we had only 3 days without wind. On the other side, we had only two good swells but that’s better than nothing. I mean we had many head high days which gives you the possibility to try all kind of moves and improve your wave riding skills.
We saw a lot of sharks and enjoyed the “internet-free” zone in Gnaraloo in a wonderful environment.

Thanks Western Australia, we will come back.